“I am not a queen. I am an honorary Salento peasant. This is an extraordinary landscape. The arrival of xylella was a terrible tragedy, of which I am a witness. We are working to save the trees and to replant them ”. The words of Helen Mirren, British actress Oscar winner in 2007, echoed Wednesday evening in the wood-garden of Palazzo Baronale Serafini-Sauli in Tiggiano, in the heart of Salento, in the province of Lecce. Special guest of the initiative “Luci nel bosco – Night of cinema, arts, nature“, Organized by Associazione Cinema del Reale, OfficinaVisioni and Big Sur with the contribution of the Municipality, Mirren told of the his love for Salento and the urgency to safeguard nature: “I grew up witnessing the phenomenon of consumerism and the consequences this has had on our society – she said – we are so lucky to be in Tiggiano, where the local administration and organizations such as Cinema del Reale they fight to defend the environment. I arrived here 16 years ago and I was able to immediately witness the growth of attention that not only in this country but in various municipalities of Salento is towards the environment. I think that each of us human beings, like animals, can instinctively understand the importance of protecting it. I have faith in young people. I think they can find methods, ways and ideas to preserve it more and more ”.

Read Also:   Attilio Fontana in tears from the hospital bed

From Hollywood to Capo di Leuca. His love of her for this land – she explains – blossomed for the the extraordinary landscape and the kindness and generosity of the population. Its presence, at these latitudes, is usual. Mirren is a fully-fledged Tiggianese. She spends her time between gardening, reading and good food. Her contribution – again this year – was aimed at celebration of the relationship with nature, animals and plants. A spell lasting one night, from dusk to dawn, animated Salento with readings, projections, performances, installations and music. The initiative, carried out under the artistic direction of Paolo Pisanelli and the creative coordination of Francesco Maggiore, opened with the suggestive performance of Coro a Coro, the polyphonic singing workshop for women who love to sing directed by Rachele Andrioli. From the moon, lying on the Earth (an installation by Hermes Mangialardo), Mirren emerged accompanied by delicate arpeggios. First the homage to Salento and her poetry with Tobacco leaves by Vittorio Bodini: “You don’t know the South, the lime houses / from which we came out in the sun like numbers / from the face of a nut … “. Then, as a true queen of the fairies, she interpreted the words uttered by Titania in A Midsummer Night’s Dream by Shakespeare: “The astonished world no longer knows how to distinguish one season from another from fruit. And all this progeny of evils descends from our quarrels, from our discords: we are the parents and the origin ”.

Read Also:   Belen and Stefano play like children on vacation. Here are the images that drive fans crazy PHOTOS

Thus began a real collective cathartic rite, one of those that mark history. We breathed belonging, care, grace, responsibility in the face of “a profound crisis – as Paolo Pisanelli defines it – that affects us all”. The Tiggiano stage followed the 19th edition of the Cinema Festival of the real and the unrealwhich from 20 to 23 July took place in the Castello Volante in Corigliano d’Otranto (Lecce), where the exhibitions are still open, including the unpublished one PPP Pasolini – Seven shots with photos of Cecilia Mangini, the first Italian documentary maker, to Pier Paolo Pasolini. The magic that this documentary festival is able to create also enveloped Tiggiano on Wednesday evening, with a schedule dedicated to cinematography and the environment. From They sang in the seventeenth century, by Antonio Marchi, Metaponto – The tobacco route by Libero Bizzarri, A handful of earth by Hermes Mangialardo, to the feature film Anthropocene – The human age by Jennifer Baichwal, Edward Burtynsky and Nicholas de Pencier.

There was no lack of live music and headphones. Celebration of nature and denunciation of the serious damage caused by human activity they found a point of contact in poetry that all forms 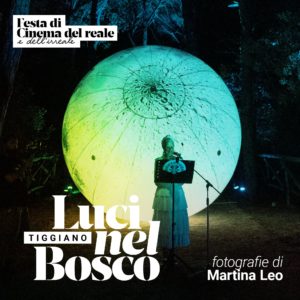 reunited art have managed to embody. Between the branches of holm oaks and the Mediterranean plants, flames have sprung up on the Lecce stone, images of trunks piled up after deforestation. A little further on a journey from the living room to the stars, the galaxy painted on the spot according to the inner flow, the solitary path of awareness of one’s gender identity translated into photographs by a young local artist, Tonio Martella. “Lights in the woods“Is fully included among the most beautiful dreams “of a midsummer night in a Salento wood”.