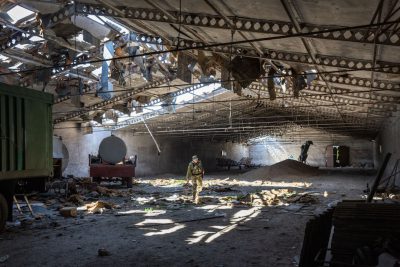 Oksana Pokalchuk, director of the Ukrainian branch of Amnesty International, resigned from her post after the organization accused the Ukrainian armed forces of putting civilians at risk by placing part of the troops fighting to stop the Russian invasion in residential areas.

Amnesty’s report was released Thursday, and the Ukrainian government compared it to Russian disinformation and propaganda.

Ukrainian President Volodymyr Zelensky accused the organization of complicity with the Russian attack on Ukraine, saying that Amnesty was trying to shift responsibility for the incident from the aggressor to the victim.
In a post published Friday on Facebook, Pokalchuk said that the Ukrainian branch of Amnesty has repeatedly stressed that the position of the Ukrainian Defense Ministry should also have been taken into account in the assessment of the situation in the country made by the organization.

“As a result, the organization has unwittingly created material that appears to support Russian fiction. In an effort to protect civilians, this study has become a tool of Russian propaganda, ”Pokalchuk said.
“Admitting it is painful, but we find ourselves in disagreement with Amnesty’s international leadership. This is why I decided to leave the organization ».

Ukrainian authorities say they have done everything possible to evacuate civilians from the areas where the fighting is taking place. Russia denies targeting civilians in what it continues to describe as its “special military operation”.